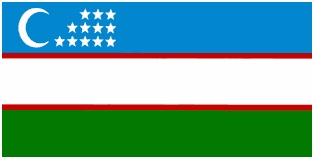 The symbolics of National flag of the Republic of Uzbekistan carries on the best traditions peculiar to flags of the powerful powers existing in the territory of our country, at the same time reflects natural features of the republic, national and cultural identity of the people.

Celestial-blue color on a flag — a symbol of the blue sky and clear water. We will read azure color in the east, it was chosen once for the flag also by great Amir Timur.

White color — a symbol of the world and purity. The young independent state has to overcome high passes on the way. White color on a flag means a kind wish that the way was pure and light.

Green color — an embodiment of the fertile nature. Now around the world the movement on environmental protection which symbol too is green color spreads.

Red strips — it is the vital forces pulsing in each living being, a life symbol.

The half-moon corresponds to centuries-old tradition of the people of Uzbekistan. A half moon and stars — a symbol of a clear sky of the world. On our flag of 12 stars. Number 12 is considered a perfection sign.