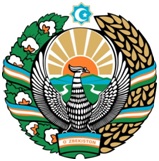 In the center of the coat of arms Humo’s bird with the opened wings — a symbol of happiness and love of freedom is represented. Our great ancestor Alisher Navoi characterized Humo’s bird as the kindest of all living beings.

In the top part of the coat of arms there is an octahedron symbolizing a sign of the statement of the republic, inside – a half moon with a star.

The image of the sun — a wish that the way of our state was lit up by bright light. At the same time it indicates unique climatic conditions of the republic.

Ears — a symbol of a daily bread, stalks with the revealing cotton boxes — the main richness of our solar Earth which glorified it around the world. Ears and boxes of cotton intertwined with a tape of National flag mean consolidation of the people living in the republic.